Project Hope Ministries was founded by Jason and Sara Cleland, who felt the call to adopt in 2005 and, through God’s perfect timing and will, were matched up with two girls from Bogota, Colombia. These young sisters joined their forever family in July of 2006. The new family spent six weeks together in the city of Bogota before coming home to Michigan, and it was during this time that Jason and Sara fell in love with the people of Colombia.

Since that summer, many things have changed. Jason and Sara have adopted a son from Bulgaria, and another daughter from Colombia. But one thing that has not changed is the family’s calling to return to Bogota and build relationships and ministries there. The Clelands have made several trips back over the past few years, often accompanying missions teams to the orphanage that the girls were adopted from. After much prayer and patience about how to take it to the next level, Project Hope Ministries was created.

Project Hope Ministries encompasses various programs, including a pen-pal outreach, child mentoring programs, and small business training for women in the poorer areas of Bogota. It is the Cleland Family’s prayer that these ministries will grow and thrive, and bring hope to the children of Bogota and their families.

The City of Bogota 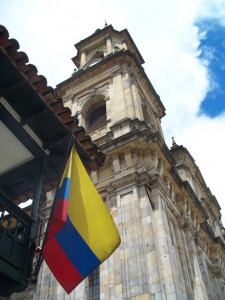 Bogota, nestled in a large valley, is the capital city of Colombia in South America. The city is home to more than 8.5 million people, and it is estimated that approximately 32.6% of these are living in poverty. The dominant religion is Roman Catholocism, although for most it is more of a cultural identity than a personal relationship with Christ.